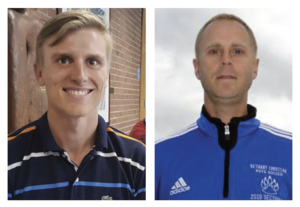 Bethany Christian Schools announces the resignation of Joel Gonzalez as the varsity girls soccer coach. Hank Willems, principal and current boys varsity soccer coach, will take over the girls program and Willems’ assistant Tony Janzen will step up as head coach for the boys.


“The transition from Hank to Tony has been in the works for a while, and the resignation of Joel Gonzalez on the girls side sped up that process,” said Athletic Director Gary Chupp.

Gonzalez is moving to Harrisonburg, but is credited with restarting the girls program in 2016 after two seasons without a team due to low numbers. He is leaving the program in good shape for Willems to take over.

“In my four years at Bethany we saw the culture change and a passion develop for the sport,” Gonzalez said. “The program is trending upwards.”

Chupp agrees, saying “Both programs have very strong momentum going, both winning sectional titles last year and each have a strong returning nucleus of players."


Willems brings 15 years of coaching experience with him as he transitions to the girls program. He coached at Logansport High School for 6 years, two of those spent leading the girls program and four with the boys. He was head boys coach for the Bruins from 2006-2011 and again from 2017-2019.


“I am thrilled every year to be given the chance to coach at Bethany,” said Willems. “I am proud to have the opportunity to work with the girls program and continue to build on the successes they have had in recent years.”


Tony Janzen brings several years of both playing and coaching experience with him to head the boys program. He played four years at Goshen College, and then went on to be an assistant coach for the men at GC.


“This is a great opportunity and new challenge in my coaching career. I have grown as a coach under Hank’s guidance the past 3 years,” he said, referring to the three seasons at Bethany where he has coached the JV team as Willems’ assistant.


Despite these changes taking place simultaneously, both programs seem poised for a successful season in the fall.


“Soccer is a sport that brings people together. Much of my character development has come from playing and coaching this special game,” said Janzen. “I look forward to a great season with this group of players.”