Jon Mark ('09) practices what he preaches in California 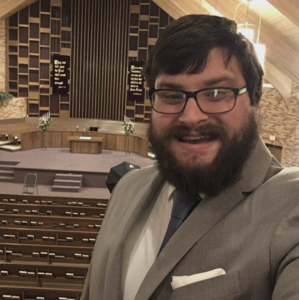 Peacemaking and creation care are roots of this Bethany alum’s ministry.
Jon Mark remembers his environmental science classes the most from his time at Bethany Christian Schools. The classes he had with Biology and Environmental Science teacher Amy Thut, who still teaches at BCS, stand out because they instilled in him a sense of curiosity and problem solving.

“At Bethany I gained the skills to see the scars of the world,” he said. “At first, I saw them as solely environmental devastation, but over time I realized how these problems also showed up in how we treated people based on gender, race, and socioeconomic class.” Perhaps it was partly this thinking that led him to be awarded the Beth Berry Peace and Justice Award as a senior and go on to continue that work in the world.

After graduating from Bethany, Jon majored in Peace, Justice and Conflict Studies and Environmental Science at Goshen College—a fitting blend of his interests. He then spent a year doing Voluntary Service in Seattle at an immigration law firm.

A constant awareness of social justice and environmental care are evident in hindsight, but Jon says he didn’t intend to become a pastor when he graduated high school. He credits a number of conversations with mentors, among them Beth Berry, the namesake of his award, as well as classes in college and his experience in VS with the ultimate decision to attend seminary.

He graduated from Duke Divinity School in 2019 and then began pastoring at First Mennonite Church in Reedley, California.

“I value my work as a way to work for peace and justice, and do that work in a community as opposed to as an individual,” Jon says, of his commitment to working for peace and justice in a tangible way. “I know that I cannot solve the world's problems, but I can faithfully do my part to dress the wounds of this world rightly."
This peacemaking work is especially relevant in our politically, racially, and socioeconomically divided society. “Reconciliation, a process of repentance and forgiveness to bring people back into the community,” said Jon, “that’s the core of peace and justice work right now. As a pastor, I strive to empower others in my community, whether it’s working with getting young adults into leadership positions or supporting people going through the immigration process.”

And while it may seem daunting, Jon says the gift of community enables this work to continue. “It’s difficult for us as people to do things on our own…individually, it’s overwhelming,” he said. “But as a community, with a lot of wisdom and different perspectives, we can discern together and mutually encourage each other. We keep moving together.”
This community is one that he has found in Reedley, California, a small, rural community of around 20,000 people around 40 minutes outside of Fresno with a strong agricultural industry of fruit farms. The town also has a large Latino population, reflected in the makeup of First Mennonite Church, where Jon pastors.

First Mennonite has two services, the first being more traditionally Mennonite with hymns and a formal sermon. The second is in both Spanish and English and more charismatic, with contemporary music. The four pastors on staff at First Mennonite work together to serve all attendees.

In addition to serving his congregation, Jon enjoys hiking and biking, spending time with his dog, Ruby, and playing video games as a form of young adult ministry.

His commitment to creation care and peace and justice is clearly life-long, and his experiences from Bethany onward culminated in his work today. “I’ve always been interested in peace and justice, and being a pastor is the way I found to realize that,” said Jon.
Published January 25, 2021 Print