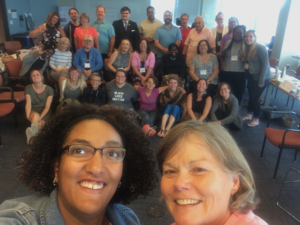 For Donna Minter, Bethany values such as service, peace and Christ-centered living have been central to her life and work for many years.

Minter is the founder and Executive Director of the Minnesota Peacebuilding Leadership Institute (Peacebuilding), a nonprofit organization in Minneapolis that provides training and support for communities to understand trauma and build resilience with restorative justice.

This organization was born out of Minter’s desire to share what she learned at her first STAR (Strategies for Trauma Awareness and & Resilience) training. She attended STAR for professional development at the Center for Justice and Peacebuilding (CJP) at Eastern Mennonite University, in Harrisonburg, Va., in 2008.

To say that attending that training changed the course of her life both personally and professionally would be an understatement.

STAR trainings integrate elements of restorative justice and nonviolent conflict transformation, as well as human security and spirituality, to help people become informed about trauma experiences and build resiliency. STAR began at the CJP after the tragic events of September 11, 2001. Church World Service gave the CJP a grant to develop a way to equip communities to understand the dynamics of trauma and healing and how they intersect with conflict, justice and peace.

As a PhD neuropsychologist who had been practicing for over 15 years, Minter realized that STAR directly applied to the work she was already doing.

“I was seeing things and working with people in the clinic and the courts and realizing there’s a bigger picture here,” she said. That bigger picture included things like historical, structural and cultural trauma, particularly for people of color, and Minter felt that the mental health diagnostic system wasn’t equipped to talk about these things.

After her first STAR training, she also realized that there might be more people in Minneapolis who would be interested in learning along with her.

When Minter returned to Minneapolis after that first week, she began thinking about how to bring STAR to people who might not have the resources to spend a week in Virginia for the 5-day training. She returned in 2009 to begin a conversation with STAR trainers at the CJP about bringing STAR to Minneapolis in the summer of 2010.

In January of that year, Minter created an introductory powerpoint and began speaking to any group of people in the Minneapolis area that would have her and might be interested in this work, “whether it was two people in a living room or 100 people in a conference room,” she said.

Minter was committed to making this accessible to anyone who wanted to come, regardless of finances, and she also wanted a diverse group of people to reflect the diversity of the Twin Cities, where the training would take place. After her months of campaigning, Minter had raised over $8000 to provide scholarships for attendees, and had a cohort of over 25 people signed up, representing five racial and ethnic groups and several faith traditions.

The first training in Minneapolis was such a success that Minter realized there could be a desire for more of this in the community. Crixell Shell, who had attended the first training, approached Minter with interest and eventually joined her as a co-trainer. Together they started offering the 5-day STAR training two or three times a year in the Minneapolis area.

As a result, Minter began the Minneapolis Peacebuilding Leadership Institute in 2013. A nonprofit organization would allow Minter and Shell to provide additional trainings in different formats to even more people. By March 2020, over 3700 people had been trained through Peacebuilding.

Since March 2020, that number has almost doubled. At the beginning of the coronavirus pandemic, Minter and her staff decided to put their trainings online—including Minter’s original powerpoint, which is now the introduction to STAR training and is available worldwide.

Putting the trainings online at a pay-what-you-can rate was definitely a risk for the organization. However, this increased accessibility has not only allowed even more people to become informed and take the trainings, but it has also increased the visibility of the organization to people with financial resources who are interested in supporting the work of Peacebuilding.

“With Covid-19 and the murder of George Floyd, there’s even more need for this work,” said Minter, referring to the highly publicized murder of a Minneapolis Black man killed by police in May of this year and the collective trauma and national unrest that followed. “We’d already been doing the work. It’s not like we had to create something new. And we’re going to keep doing this.”

Part of doing this work includes empowering communities that may benefit from these skills in trauma healing and resiliency. “I love it when city leaders pay attention to us and want to talk to us, but I don’t wait around for the leaders. We all get to be leaders within our own spheres of influence,” said Minter.

For Minter, part of her foundation as a person of faith began years ago at Bethany.

“I have such strong memories of teachers who were solid and grounded in their faith, and that’s how they were teaching,” she said. “Bethany was willing to do things differently, and be creative with what it meant to be in education. It was a really important foundational time for me.”

In 2019, Minter was honored with the Melanie Greenberg U.S. Peacebuilding Award of Excellence from the DC-based international Alliance for Peacebuilding. Peacebuilding continues to offer trainings online in a variety of formats, and there are now six people on staff including Minter and her now co-executive director Shell.

“This work has allowed me to take what I know from my psychology foundation and build on that in a new way. It’s been an exciting journey, and it’s a journey that anyone can take,” said Minter. “This work gives me an incredible amount of hope.”