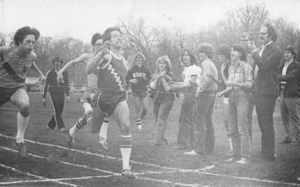 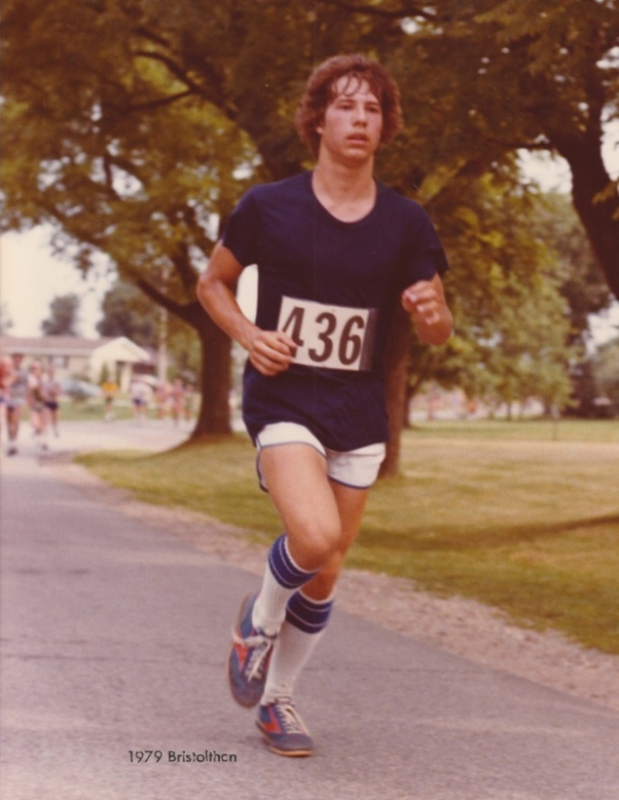 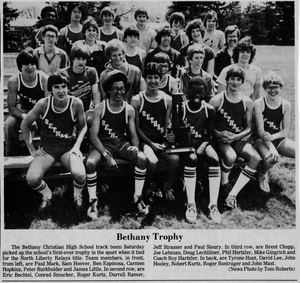 Some of my fondest high school memories at Bethany were of track competition and camaraderie.  I entered BCHS as a sophomore, after a year spent in England my freshman year. Roy Hartzler coached us, and I remember doing “long, slow, distance” training runs and “fartlek” intervals. We appreciated Roy not only for making training fun, but also because he ran with us during training, as a devoted runner himself. I had run the 220 and 440 in 8th grade at Towncrest, but switched to 100 and 220 in 10th grade. Galen Graber was our lead 440 runner that year. I also ran on the 880 relay time with brothers Jon and Mike Gingrich and Tom Charles. (I still remembered losing to Mike in the sprints during Field Day at Waterford Elementary!) In my copy of that year’s Witmarsum, T.C. reminded me of my moment of relay glory against Lakeland when I received the baton in anchor position 10 yards behind our competition and made up the ground for the win! That earned me the semi-mocking nickname of “Flash.” (Better than my nickname of “Fly” during little league baseball, I suppose.) The team made history that year for its first win in four years (36 straight defeats), against White’s, and went on to win two more for a record of 3-6. The photo below is probably the finish of the 100 against Northridge, with coach and Science teacher Roy Hartzler looking on to my left. Math teacher Keith Stuckey is timing on the far right while Senior Deb Weaver is holding the finish tape.

Other consistent winners included Jon Gingrich in the 220, Galen Graber and Wes Parker in the 440 and hurdles (including a Parker school record in the 330 hurdles of 44.8), Steve Hanson in the 880, Roger Kurtz in the mile and 2-mile runs, Jon Metzger in the high jump with a school record, and Paul Steury in the shot put and discus.

Part of the fun of track meets was riding the bus to and from the meet, which provided chances to joke around and deepen friendships, among both the boys and girls teams. Track provided an equalizing opportunity unique from the other sports, since the boys and girls trained together. We often enjoyed stopping at McDonalds for dinner on the way home. Over that summer, Roy encouraged track team members to keep running by doing the local Bristolthon race. Sprinters like me ran the 5.5 mile run, while Coach Hartzler ran the 25K. I really suffered running long distances but I’ll never come close to the 7:36 min/mile pace I did then. An event photo shows me running in long hair and tube socks, which were both fashionable at the time.

Reading about the Track team in the Witmarsum is a little confusing since the preceding spring’s team is included, not the team of the book year.  So according to the 1982 Witmarsum, “the 1981 boys’ track team set new records in eight events. The high point in the season came when the team tied with North Liberty for the first place in the last annual Liberty Relays. For the first time ever, the team came home with a meter-high trophy. The season climaxed with 11 team members going to sectionals; and in another first, Roger Kurtz, a [3200] runner, went to regionals.” I had another successful year in Track, breaking my own 400 m school record and anchoring the school record 1600 meter relay team, consisting of Conrad Smucker, Roger Kurtz, Mike Gingrich, and myself. The team finished with a 2-6 regular season record.

Afterwards, my dad reported in his diary that I thought my record would stand until my brother Randy broke it. Randy still has the 200 m BCHS record, but did long jump (where he also holds the BCHS record) and didn’t run the individual 400 m. My 400 m record stood until May 24, 2018, when Cedric Brenneman broke it with a time of 51.48 and then broke his own record again on May 23, 2019, with a time of 50.53.

Now, 40 years later, I look forward to attending my 40th BCHS class reunion in September, 2021. When I realized that 40 years ago I also ran my fastest 400 m time and school-record, I wondered how fast I could run it now, four decades older and 25 pounds heavier. I had been keeping fit by running outside and indoors during the COVID pandemic, including some 5K and 10K races. So I decided to run a 400 m on the track one more time on the 40th anniversary of my record, May 14, 2021. How fast should I aim for? Since I could comfortably run 8 mph on a treadmill for 1 minute, I set my goal for a 90 second 400 m, which meant a 10 mph speed. On my first run outside this spring, I found I was pretty stretched to run 10 mph for 60 seconds, so I’m upping my training with more sprint intervals. I’ve also lost 10 pounds and aim to lose 5 more before the day of the run. My son Nick has promised to pace me, and my wife Jessica will video the event. I’ll let you know if I break my 90 second goal. Meanwhile, I encourage BCHS track alumni to give generously for the new track!
Published March 25, 2021