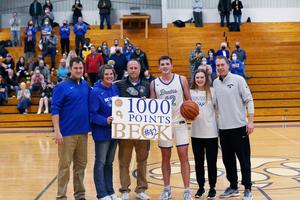 
“Scoring 1,000 points in a high school career is a significant milestone for any basketball player, but I think what makes it more remarkable for Beck is that I don't consider him a scorer. I think Beck is a playmaker, and oftentimes the right play is passing the basketball, or setting up your teammates”, said Gary Chupp, Bethany’s athletic director.


Beck entered the home game against Hamilton needing 29 points to reach the 1,000 point marker. Through the first half, Beck kept sinking shots from all over the floor, only needing an additional 5 points going into the second half.


It didn’t take long into the third quarter, when Beck knocked down a jumper to give him a 1,001 career total! The fans went WILD and teammates came off the bench giving high fives. A timeout was called to celebrate the moment. His family came onto the court for a photo and Gary presented him with the game ball. Every fan in the gym was proud to be a part of his athletic achievement!


“The selflessness that Beck exhibits on the basketball floor extends off the court as well. You could see by the outpouring of support from the community, his teammates, and classmates that Beck is well liked. He has always treated people the right way, and he leads by example,” Gary said.


Varsity coach Daniel Mast said, “Beck has been a leader and has earned the trust and admiration from his teammates and coaches balancing tireless work ethic, high expectations of team, and even higher expectations of self, with a genuine caring and inclusivity of others.” He added, “Without any of the points being scored Beck would have left an imprint of himself on the program for years to come, the points are the indication of time and energy he has put into being the best basketball player he can be.”


“Ever since Beck has been at Bethany, he has been willing to make the right basketball play, so it is especially rewarding to see him reach the 1000 point milestone”, Gary added.


Coach Daniel ended by saying, “Thank you Beck for establishing a winning culture in the Bethany basketball program and congratulations on this mark of an extraordinary accomplishment of 1000 points (with more to come!)”