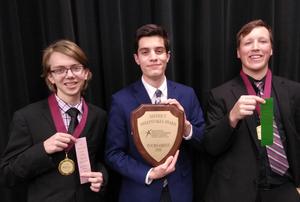 At the Northeast Indiana District speech tournament at Plymouth High School on Saturday March 5, 2022, Bethany speakers were recognized for their performances at the tournament and over the course of the tournament series.

Jacob Leininger, who could not compete today because of a college scholarship competition, Josiah, and Ian were all named to the All-District Team, representing three of the top 25 students among those competing in the District. And for the first time in program history, Bethany took home the Northeast Indiana District Sweepstakes Award, given in recognition for the team's overall participation and performance in District speech, debate, and Congress tournaments.

The team concludes its regular season next Saturday March 12, in the Indiana Schools Speech and Debate Association State Finals at Fishers.