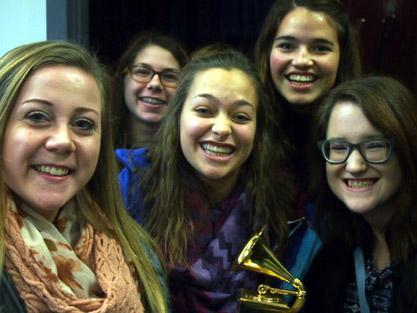 Students examined different methods of development as they wrote poems, short stories, creative nonfiction, and plays. The class took in a live poetry slam in Chicago and wrote about their experiences in the city. 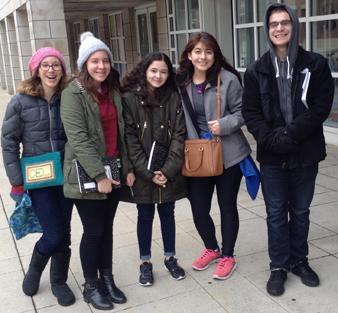 Excerpt from A Walking Memoir by Jennifer Wiebe: "I saw a wooden bridge, with gaps between the boards... My heart started to beat real fast. I told myself not to look down, so I kept my head straight to the other side of the field. I crossed the bridge slowly, but safely, one step at a time. I was getting closer when my feet slipped. Apparently it rained that day and the bridge was still wet and slippery. I fell but held myself from the railings that were made out of wire. I was so terrified that I would fall in the water and drown. But I didn't. I made it to the other side with just several minor scratches on my legs. I turned around and crossed the bridge again to return to the place I came from. This time with no fear, but with confidence."

The City by Clara Lind: "Shiny metal beetles with glowing eyes inch along the streets, and patches of dead grass dot the landscape, sometimes surrounding a circle of water covered with a thin pane of cracked, glassy ice. Gnarled trees lean towards the hidden sun, their shivering branches coated wtih leaves of ice while buildings of sleek metal and glass rise above it all, infintely tall as they fade and vanish into the clouds. This world has a harsh, cold beauty all its own, but the people who live there do not care to look. They move from place to palce with purpose, their faces tilted toward the ground. Thinking only of where they have been and where they soon will be, they let the world around them melt and disappear into the sky."

Students watched movies, discussed the ideas, cooked food that some of the movies talked about, and experimented with movie special effects such as green screen. The primary objective was how can we learn from movies--even poor ones--and to help students think about how they watch movies. Some questions used to analyze movies included: What is a hero? What belief systems or values are represented? What transformation do the characters undergo?

Students studies intentional communities and then spent one week at Koinonia Farm an intentional Christian community that seeks to embody peacemaking, sustainability, and radical sharing. While honoring all people of all backgrounds and faith, they strive to demonstrate the way of Jesus as an alternative to materialism, militarism, and racism. Koinonia vision: Love through service to others Joy through generous hospitality Peace through reconciliation Students learned they don't need social media to have community as they put aside technological gadgets to value building relationships with each other and with Koinonia members as they lived and worked with them.

This class will run in June 2017: People--individuals, communities, and the broader structures that govern and motivate our actions--have the unique gift of variety. We also have the great privilege of interacting with each other and our social surroundings in myriad ways. Let us journey together as *caminantes--travelers, wanderers, wayfarers--in Paraguay this summer, discovering and delighting in the awesome variety of a small Latin American country many degrees south of us by forming relationships with Paraguayans and exploring its culture and landscape.

Students learned about aerodynamics, flight controls, navigation, air traffic control, aeromedical aspects of flight, and Federal Aviation Regulations from an FAA-certified Ground Instructor. Each student logged their first pilot time with a flight instructor, charting their course beforehand as they flew a leg in a route from Goshen to Kendallville to Sturgis and return.

Students learned the behind-the-scene workings of the stage and constructed the entire set for the upcoming musical, Honk! In the process they learned to use a variety of tools, paint, and materials, to create stage settings, lighting effects, and sound effects.

Students studied the historical stories and relationships among Mennonites, African-Americans, and Choctaw Indians in Noxubee County, Miss., and experienced firsthand the poverty and racism that is still prevalent during their four-day stay in Mashulaville. During that time they installed mailboxes, painted, chopped and delivered wood, visited and prayed with homebound residents, and visited historical sites of the Civil Rights era (1960s).

Students learned the important role of native plants in an ecosystem, learned to identify some of northern Indiana’s most common native plants, and explored soil composition and composting. Each student build a terranium and all sampled some tasty plant-based foods.

Meat from Farm to Table

Students learned how meat is raised and ethical issues around raising animals for meat and how some local farmers address these issues. They process whole animals into roasts and steaks and bacon and sausage and chops, studied the best ways from around the world to prepare and cook different cuts to bring out the best flavor and tenderness, and then seared, baked, smoked, BBQed, grilled and slow-cooked the meat for them to eat!

Students gained an in-depth look at World War II history--the causes, how it may have been avoided--and opporunity to change history through the game Axis & Allies.

Reach Out and Serve

Students reflected on following Jesus as servants as they served the broader community by reading with local first graders, visiting and playing games with elderly people, caring for animals at Loveway, and repairing bicylces at Chain Reaction.

Students learned cooking terms and measurements and how to use kitchen equipment and read recipes as they made baked and cooked food from various cultural cuisines. And they learned how to be wise consumers in the grocery store and how the food industry operates to get food to consumers.

Students played and watched sports (basketball, dodgeball, soccer, volleyball) and then developed their skills in writing poetyr through the lens of sports. 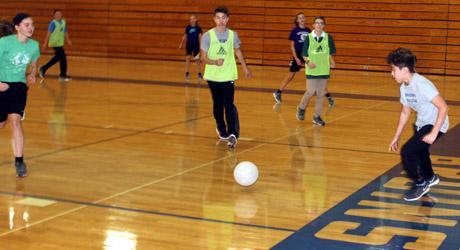 Rain by Tyson Miller
It lasted for only 17 minutes,
but it was just enough time for millions of gallons to flow over the Niagara Falls,
thousands of hours to be uploaded to Youtube,
for thousands of babies to take in their first breath,
for Bill Gates to earn twice my dad’s salary,
and for me to wait 108 years, imagine 2,327 ways they might choke,
and of course, of course, the miserable rain finally ended.

Students learned various life skills such the difference between a debit and credit card, how to get ketchup stains out of clothes, how to provide CPR, or how to change a tire (also making model cars to understand how they are built and function). They also focused on spiritual growth and helping/serving others.

Students immersed themselves in the pop music genre of the 20th and 21st century, discovering the difference between the “classical” and “pop” voice while also briefly exploring country, folk, jazz, rap. Students rehearsed and performed as a group as well as two solos.

Students studied mysteries through games, puzzles, and drama--solving mini-mysteries and testing their observation skills. They also had a mystery meal and movie.