I Never Saw Another Butterfly

Feb. 24, 26-27, 2011 Bethany Christian High School brings the Holocaust to stage in Celeste Raspanti’s I Never Saw Another Butterfly, a play of love and hope set amid the loss and anguish of living in the Jewish ghetto of Terezin during World War II. 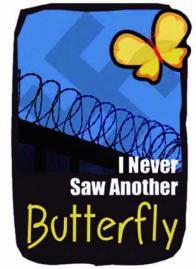 “I believe in life,” says Irca (portrayed by sophomore Sadie Gustafson-Zook), as she voluntarily joins her husband’s transport to Auschwitz, the infamous death camp run by Nazi Germany. Director Talashia Keim Yoder, says, “To Irca and the many who passed through Terezin, living was not the act of breathing. To believe in life at Terezin was not to believe in staying alive as long as possible, but to believe in making every moment of life count.”

Based upon a true story, the play follows Raja Englanderova (sophomore Maddie Gerig and junior Hannah Beachey) and her experience as a young girl living in Terezin during the Holocaust. During this time of despair, there is a small beacon of hope for all of the children trapped in Terezin. Her name is Irena Synkova (senior Emily Shenk), and she has dedicated her life to being a teacher for the children. She encourages them to creatively express their feelings through drawings and poems.

Meanwhile, Raja also befriends a young man living in the ghetto, Honza (Lucas Morgan). Together they unite the segregated boys’ and girls’ houses, in the form of a secret newspaper. Although Raja’s story is permeated with loss and anguish, it is also infused with love and hope. Journey with Raja as she learns the only way to survive is through the companionship forged out of this shared experience.

Keim Yoder says, “Terezin has been called a miracle. Miracles and hope can be found in many stories that have survived the Holocaust, but I find myself uniquely drawn to this story. In this transit camp, the adults decided to put the children first. They believed that the little time the children had left on this earth should be as rich and full as possible. So the many artists, teachers, and musicians there banded together to teach the children. The events you see in this play are only a sampling of the lives the children led there.”

Of the more than 15,000 children who passed through Terezin, only 141 are known to have survived. But the many drawings, poems, and other works of art that Raja and her friends smuggled out of Terezin have been shared with the world, and through them, these 15,000 children live on. “The miracle of Terezin is the belief in life that comes through in these beautiful creations made in the midst of horror,” says Keim Yoder.

The real-life compilation of the artwork from the children of Terezin is featured in the book, I Never Saw Another Butterfly, edited by Hana Volavková. The title comes from a poem, written by Pavel Friedmann who was not one of the survivors—he was killed at Auschwitz—that was discovered when Terezin was liberated in 1945:

“The last, the very last,
So richly, brightly, dazzlingly yellow.

Perhaps if the sun’s tears would sing
against a white stone. . . .
Such, such a yellow
is carried lightly ‘way up high.
It went away I’m sure because it wished to
kiss the world good-bye.

For seven weeks I’ve lived in here,
Penned up inside this ghetto.
But I have found what I love here.
The dandelions call to me
And the white chestnut branches in the court.
Only I never saw another butterfly.
That butterfly was the last one.

Butterflies don’t live in here,
in the ghetto.”

Tickets are $8 for adults and $6 for students. To ensure a seat, reserve tickets ahead of time in the school office or call 574 534-2567. Thursday and Saturday performances begin at 7:30 p.m. and the Sunday performance at 3 p.m.